In 2050 it became finally clear that humanity failed to stop global warming. While scientists discovered that several tipping points had been reached and an irreversible damage had been done to the ecosystem, economists took the opportunity and pointed out that it makes no sense to burn further money on the reduction of carbon dioxide as humans are going to burn anyway. The slogan "Earn till you Burn!" was cast and successfully promoted further economic growth instead of environmental conservatism.

Quickly "ecological activism" was recast to "ecological terrorism" and movements like "Fridays for Future" outlawed, head figures of these movements publicly executed. The рубль rolled again...

In this dying world you are Ghislain, a French gardener with his share of prison experience for crimes like "Tree Hugging", "Plant restoration", etc. In your last solitary confinement you realised that you have to fight the system from within. Now you are producing and selling flowers and the neoliberal forces are happy. You are happy, too, as you can work with plants. You know that it is a fight you can not win but every bit helps and your tasks is, should you chose to accept it... Protect and grow flowers! 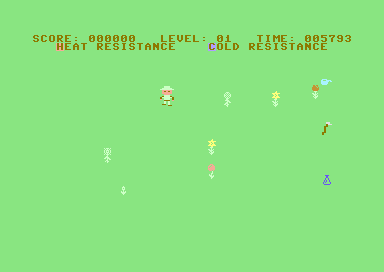 This goal can be reached by watering the flowers and destroying the weeds. The plants usually dry out in the hot weather (turning first brown and then gray), therefore they must be watered. From time to time hot or cold weather fronts will attack the flowers. Sturdier flowers must be developed. If there are too many weeds on the screen then you lose, too. The time for each level is fixed and at each level the weather catastrophes will be more aggressive. Weather extremes are:

The watering can be used to water flowers, their heads will turn blue indicating that the plants have been watered. Watered flowers may produce an offspring but they also need to be watered regularly. With the rake it is possible to remove the weeds growing in the area. The Erlenmeyer flask is needed to analyse plants. It will change its colour turning blue or red. If Ghislain picks up the red flask and analyses a flower, this flower is destroyed but the resistance against heat is increased. The blue flask will increase cold resistance.

To play the game use a joystick in port two on a real Commodore 64. The browser game is played via the cursor keys and the 'z' key replaces the fire button.

Some tips to increase your score:

It is loosely based on the game "Pests" by Kevin Woram published in Compute! Issue 49, 1984, 36. The original game was never played only the description read...

This game is part of the C64 Cassette 50 Charity Competition: https://itch.io/jam/the-c64-cassette-50-charity-competition. As the competition is now over a download has been made available. The source code is available at https://gitlab.com/pararaum/gardening-vs.-global-warming-cassette-50.

This game was made by The 7th Division and Vintage Computing Carinthia. No flowers have been harmed during the production.

Thank you for your kind words! Actually, you reached a higher level than I did. Congratulations! 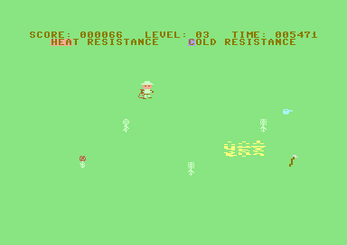 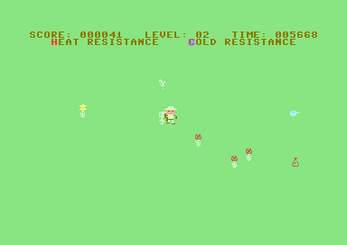 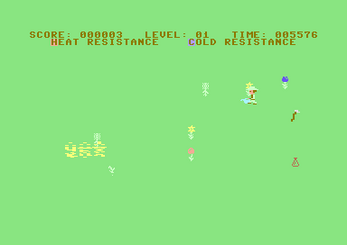